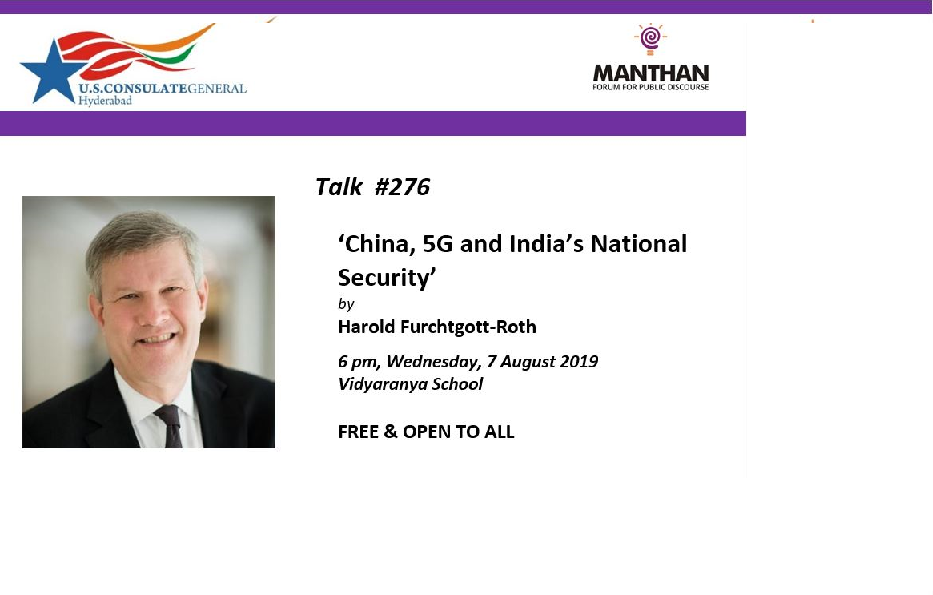 Harold Furchtgott-Roth will discuss concerns about China’s 5G wireless technology development. Over the next decade, wireless carriers around the world will invest tens of billions dollars in new 5G network equipment. Does the inclusion of wireless network equipment from Chinese providers such as Huawei and ZTE create a security risk in other countries such as India? Dr. Furchtgott-Roth will explore different types of security risks posed by equipment from China including espionage, sabotage, and supply-chain dependency.

From 1997 through 2001, Mr. Furchtgott-Roth served as a commissioner of the Federal Communications Commission. In that capacity, he served on the Joint Board on Universal Service. He is one of the few economists to have served as a federal regulatory commissioner, and the only one to have served on the Federal Communications Commission.

Before his appointment to the FCC, he was chief economist for the House Committee on Commerce and a principal staff member on the Telecommunications Act of 1996. Earlier in his career, he was a senior economist with Economists Incorporated and a research analyst with the Center for Naval Analyses.

Mr. Furchtgott-Roth is a member of the Washington Legal Foundation’s Legal Policy Advisory Board. He is the coauthor of three books: Cable TV: Regulation or Competition, with R.W. Crandall, The Brookings Institution, 1996; Economics of A Disaster: The Exxon Valdez Oil Spill, with B.M. Owen et al, Quorum Books, 1995; and International Trade in Computer Software, with S.E. Siwek, Quorum Books, 1993.