Trafficking of people, and in particular, women is a major ill of the society. The sheer volume of trafficking should put us to shame, while most of us are either unaware of the situation or have got de-sensitised.

Sunitha Krishnan, who has single-handedly rescued more than 3000 women from trafficking, is a real-life hero. We learnt much about the problem, her experiences during the course of her work, and what society should do about it.

Sunitha Krishnan is a real-life hero. Read excerpts from an article about her in The Hindu, below:
This woman of steel, all of four feet six inches, is keeper of the eternal flame of hope for more than 1,000 children in Hyderabad. Winner of several prestigious awards for her work, Sunitha Krishnan, who has her roots in Palakkad, was in the city to meet architect G. Shankar to draw a plan for a permanent building for her “children and other survivors” of human trafficking, on 10 acres of land on the outskirts of Hyderabad.

As co-founder of Prajwala (which means ‘eternal flame’ in Sanskrit) (www.prajwalaindia.com), a non-governmental organisation (NGO) that runs 17 transitional schools and three shelters (two for children and one for women called Astha Nivas and Asha Niketan respectively) in Andhra Pradesh for “abused children and former victims of commercial sexual exploitation,” Sunitha has her hands full. But she says she cannot rest when she knows that each day, many girl children are trafficked all over India.

Rescue operations
“Each minute counts. Sometimes, we get information about minor girls, some as young as three, and by the time, we marshal the man power and police protection to mount a rescue operation, it would be too late to prevent the child from being sold into the flesh trade,” says Sunitha regretfully, speaking in a mix of fluent Malayalam and English.

The only time her cheerful countenance falls is when she recalls rescue operations that could not save a child, from the clutches of the flesh trade. Even numerous assaults, some of which have left permanent scars (her hearing on the right is partially impaired and her left arm cannot be straightened) have not deterred her from rescue operations.
It has only steeled her resolve to carry her crusade against human trafficking. “I have never let obstacles of any kind stop me from helping people from less privileged strata of society; something I used to do as a school student. In those days, I used to teach children in my neighbourhood. But, in my teens, when I was living with my parents Raju Krishnan and Nalini Krishnan in Bangalore, my attention turned towards women who were sexually exploited,” recalls Sunitha.

Her radical views and work estranged her from her parents and Sunitha completed her graduation and post-graduation (psychiatric social work) on her own.

She decided to live amongst the “sexually exploited” and gradually gained their confidence. “It was an uphill task as they were very hostile initially. But eventually I was allowed into their secretive but painful lives of constant abuse and fear. In 1991, I managed to rescue a mentally-impaired 12-year-old who was being molested by men in broad daylight. That gained me respect in the eyes of those tough but vulnerable women. But I still lacked focus,” says Sunitha.
Her radical protests against the 1996 Miss World pageant in Bangalore led to a two-month term in prison. In the meantime, a chance acquaintance with Brother Varghese Theknath made her move to Hyderabad where she met Brother Jose Vetticatil, who was then Director of Boys’ Town.
“Jose was my mentor, friend and guide and we joined hands to help women in Mehboob-ki-Mehendi, a red light area in Hyderabad,” she says.
Prajwala
However, it was in 1996 that the seeds of Prajwala was first sown in a small building in Mehoob ki Mehendi. “Following a court order, the police evicted the women in the red light area and hundreds of women were thrown out in the streets. Many took their own lives. Their only dream was to see their children escape their fate. That was how I set up the first school with five children in an empty brothel provided by their mothers,” narrates Sunitha. Soon desperate mothers began to make a beeline for the school. They also began to inform Sunitha about minors in the red light area and that motivated Sunitha to launch her rescue missions.
Many of the children were HIV positive and each had horror stories to relate. But the children amazed Sunitha with their resilience. Many of them made their way back to school and went on to become teachers themselves, says Sunitha, every bit the proud matriarch. The children are educated up to class seven by the teachers in Astha Nivas, and then they are enrolled in regular schools, a task that is also difficult.
“Our aim is to get the children into mainstream life. Unfortunately, the recognition our work has brought us has sometimes stood in the way of the children getting admission in schools. The school authorities know that children from Prajwala are survivors of human trafficking, some of them might be HIV positive … and so some school authorities insist on tests and try to keep these children out on one pretext or the other,” explains Sunitha.

But Sunitha has always challenged the odds, be it financial, physical, emotional or spiritual, and won. With the help of Father Jose, they went on to start a centre to train the older women in printing, carpentry, masonry and so on and today Prajwala Enterprises is a Rs. 1-crore small industry that employs mostly “survivors.” Although Brother Jose passed away, Sunitha has continued the work they began together.
Finance and space have always been a problem for Prajwala. “At one point, I had to sell my personal belongings to pay the salary of our staff. But I managed to pull along. Many of the awards have helped but lack of funds is a perennial problem,” admits Sunitha.
The latest was when Prajwala was requested to vacate the building where they were running three schools. “I was at my wits’ end trying to raise the money when a stranger I met at the airport gave me a cheque for Rs.35 lakhs. He turned out to be M.H Dalmia, the owner of Dalmia Cements. Philanthropists like him have kept Prajwala ticking. We managed to buy a plot and now the goal is to raise enough money for a building to house all the survivors,” says Sunitha.

“But I have failed to groom a second tier of leadership for the organisation and that is my aim now…” adds Sunitha. When the word impossible does not exist in her vocabulary, one is sure that this woman of steel will achieve that too.

Sunitha is married to filmmaker Rajesh Touch River who has also made several films for Prajwala. One of the films, ‘Anamika,’ is now a part of the curricula of the Andhra Pradesh Police Academy and the National Police Academy, says Sunitha. For her efforts to stop human trafficking, Sunitha has won awards like the Stree Shakti Puraskar, Perdita Huston Human Rights Award, World of Children Award, National award for child welfare and CNN IBN real hero award. But her real award, she avers is when a child she rescues goes on to light the flame of hope in other children. 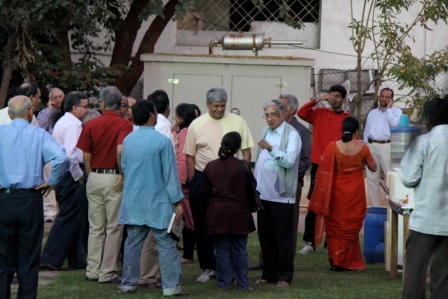 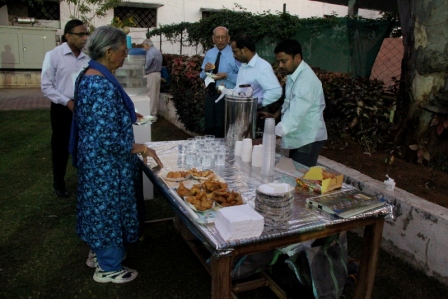 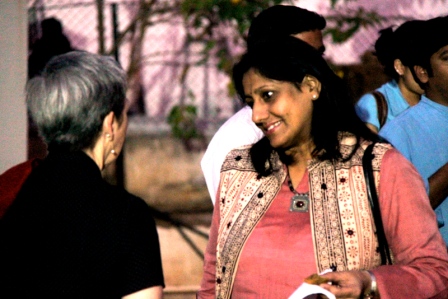 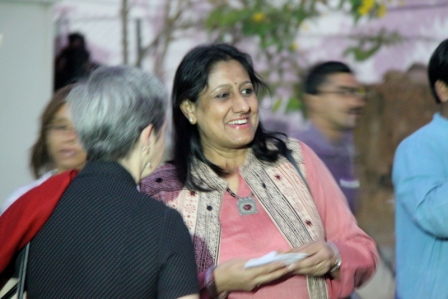 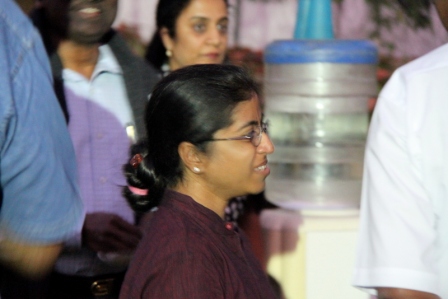 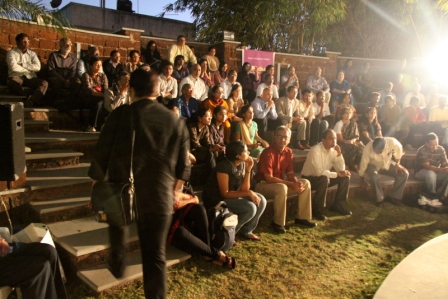 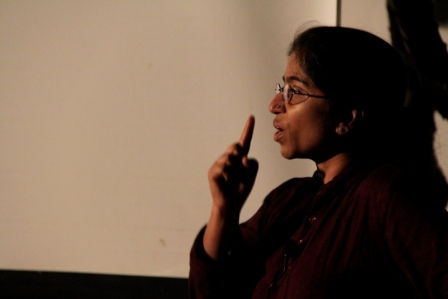 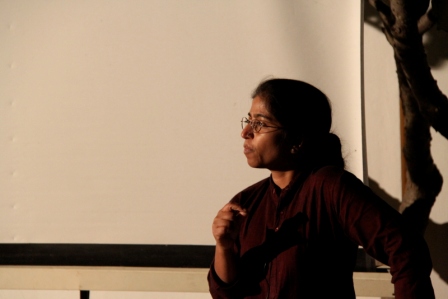 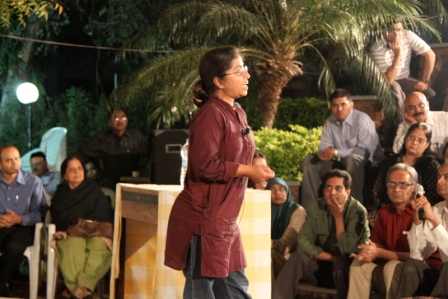 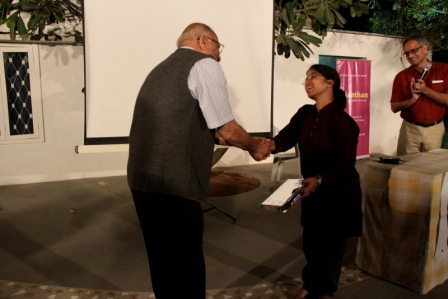 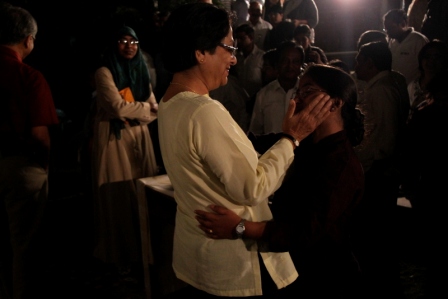 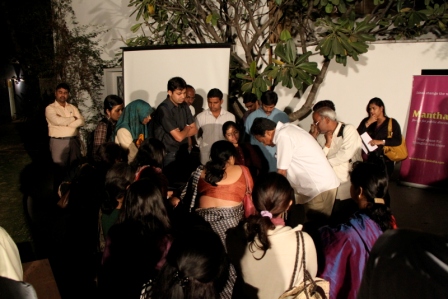 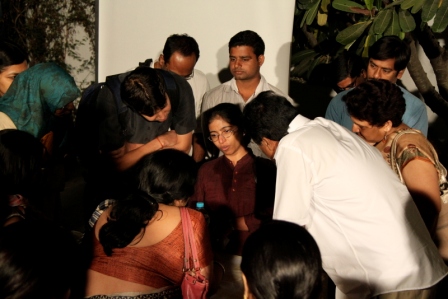 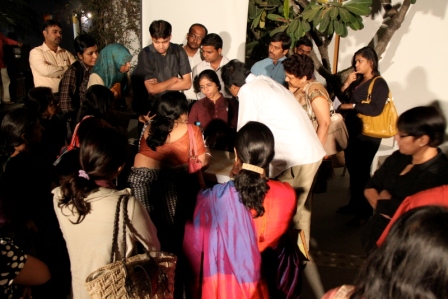