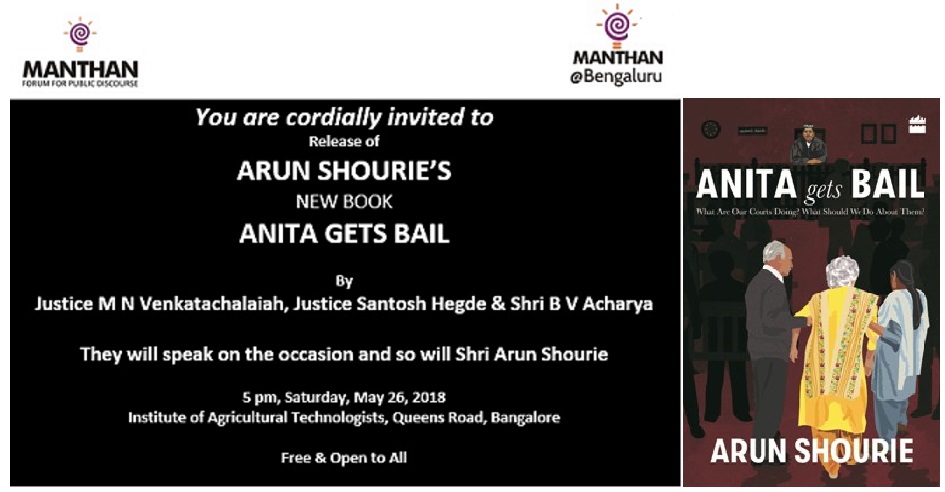 The judiciary has been the one sturdy dyke that has saved us from the excesses of rulers. But recent events remind us of the cracks that have formed: the quality of individuals apart, even the institutional arrangements that had been put in place to preserve the purity and independence of the institution-the collegium, conventions governing the way cases are to be assigned among judges-have frayed. These cracks provide a dangerous opportunity to political rulers to suborn this institution also.

In his new book, ‘Anita Gets Bail’, through actual cases and judgments of various courts, Arun Shourie enables us to see how frail and vulnerable this ‘last pillar standing’ has become. A judge who by a brazen manipulation of facts lets a prominent politician off … Events and a judgment that let the convicted choose the prosecutor who is to conduct the case against them … Courts that turn a blind eye to life-and-death reforms even as they preoccupy themselves with trivia … Courts that deliver ringing judgments and then do not care to look if their directions are being implemented … Courts that disregard their own judgments on penalizing persons for perjury, for dragging out cases … Courts that do not think through the consequences, even the predictable consequences of their judgments … Judges who prevaricate, who look the other way when some of their own fraternity come under a cloud … A judge who is manifestly unbalanced, judges whose knowledge of the most elementary facts of science is laughable, a judge whose prose even the Supreme Court is unable to comprehend-all of them continue to hand down rulings that affect the fortunes and lives of thousands … Judges who disregard well-settled principles to such an extent that their colleagues are compelled to make their grave misgivings public…

Through meticulous examination, Arun Shourie leads us through judgments and instances-some hilarious, so many infuriating-and points to things that each of us – judges, lawyers, laypersons like us-can do to retrieve this most vital of institutions.

This new book published by HarperCollins Publishers will be released at Bangalore at this event by an eminent panel consisting of Justice M N Venkatchalaiah, Justice Santosh Hegde and Shri B V Acharya each of whom shall speak at the event, along with Shri Arun Shourie.
Justice M N Venkatachalaih was a distinguished Chief Justice of India.
Justice Santosh Hegde is a distinguished former Judge of the Supreme Court of India.
Shri B V Acharya is a Senior Advocate.

Shri Arun Shourie is India’s foremost public intellectual and conscience keeper. He has written over 25 best selling books and is one of the most sought after voices in the country.

Event on FB: http://bit.ly/2I1HF0p
Manthan
Manthan is one of India’s premier forum for public discourse. Established in 2005, Manthan has since played an important part in raising the quality of public discourse. Manthan (www.manthanindia.com) has hosted over 235 Talks of a very high calibre covering the widest range of subjects that could interest and intelligent person.