‘Partitions of the Heart’ – Harsh Mander 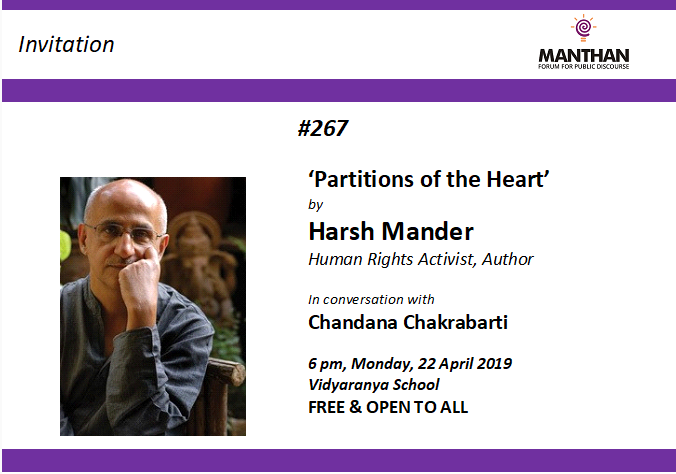 The Conversation
This conversation shall be based on two hugely important books written by Harsh Mander.

Partitions of the Heart: Unmaking the Idea of India, takes stock of whether the republic has upheld the values it set out to achieve and offers painful, unsparing insight into the contours of hate violence. It shows that hate speech, communal propaganda and vigilante violence are causing damage to the country’s social fabric which may be irreparable.

Between Memory and Forgetting: Massacre and the Modi Years in Gujarat is a compelling and essential compilation of happenings in Gujarat in 2002 and after.

Harsh Mander
Harsh Mander, human rights worker, writer, columnist, scholar and teacher, works with survivors of mass violence, hunger, homeless persons and street children. He is Director, Centre for Equity Studies and Special Commissioner to the Supreme Court of India in the Right to Food case.

He is the founder of the campaigns Aman Biradari, for secularism, peace and justice; Nyayagrah, for legal justice and reconciliation for the survivors of communal violence; Dil Se, for street children, and ‘Hausla’ for urban homeless people. He worked formerly in the Indian Administrative Service in Madhya Pradesh and Chhatisgarh for almost two decades.

• ‘Partitions of the Heart: Unmaking the Idea of India’
• ‘The Right to Food Debates: Social Protection for Food Security in India’
• ‘Reconciliation: Karwan e Mohabbat’s Journey of Solidarity through a Wounded India’
• ‘Fatal Accidents of Birth: Stories of Suffering, Oppression and Resistance’
• ‘Looking Away: Inequality, Prejudice and Indifference in New India’
• ‘Ash in the Belly: India’s Unfinished Battle Against Hunger’
• ‘Fear and Forgiveness’ (New Delhi, Penguin India)

He regularly writes columns for the Hindu, Hindustan Times and the Mint, and contributes frequently to scholarly journals. His stories have been adapted for films, such as Shyam Benegal’s Samar, and Mallika Sarabhai’s dance drama Unsuni.

He writes and speaks regularly on issues of social justice. He teaches courses on poverty and governance in the Indian Institute of Management, Ahmedabad; and St Stephen’s College, Delhi. Past teaching assignments include the LBS National Academy of Administration, Mussoorie; and the Nelson Mandela Centre for Peace and Conflict Resolution, Jamia Millia Islamia, Delhi. He has also lectured at the California Institute of Integral Studies, San Francisco and the Centre for Law and Governance, Jawaharlal Nehru University, Delhi; Institute for Development Studies, University of Sussex, UK; NALSAR (National Academy for Law) Hyderabad; MIT, Boston, UCLA, Universities of Stanford, Washington (Stanford), Austin, and several others.

He was Chairperson of the committee established by the Government of India for design changes in the Urban Health Mission to make it work for urban poor people. He was also on various national official National Committees such as on Social Protection and both the Saxena Committee for Rural BPL and Hashim Committee for Urban BPL. He was a Member of the Core Groups on Bonded Labour and Mental Hospitals of the statutory National Human Rights Commission. He is founder Chairperson of the State Health Resource Centre, Chhatisgarh, which established the Mitanin Community Health Programme, which was the fore-runner of the Asha Programme.

He is associated with social causes and movements, such for communal harmony and justice, tribal, dalit, child and disability rights, homeless people and bonded labour. He is a founding member of the National Campaign for the People’s Right to Information. From October, 1999 to March 2004, worked as Country Director, ActionAid India, a development support organization. He is Chairperson of INCENSE (The Inclusion and Empowerment of People with Severe Mental Disorders). He is a member of the Working Group of the Project on Armed Conflict Resolution & People’s Rights, University of California, Berkeley.

Use this link for RSVP  http://bit.ly/2DkeMfk