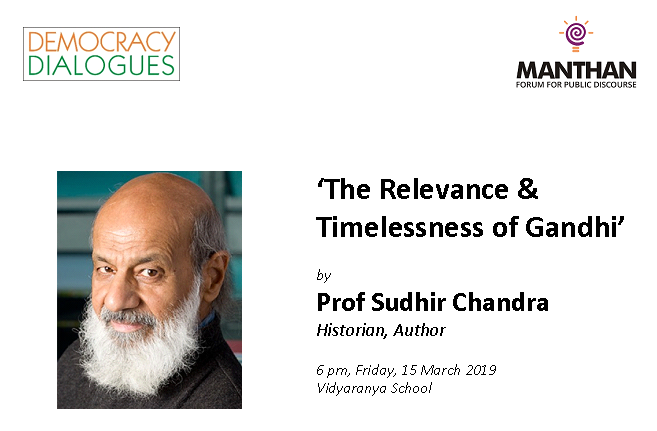 The Talk
In this 150th year of Mahatma Gandhi’s birth, we need to understand the great man, his relevance to today’s problems, and what made him a man the like of which had not ever walked the earth before.

Prof Sudhir Chandra, one of India’s foremost scholars of Gandhi, will help us understand this.

Sudhir Chandra
Sudhir Chandra is the author of ‘Gandhi: An Impossible Possibility’, and editor of ‘Violence and Non-violence Across Time: Religion, Culture and History’.

He is currently engaged with the question of the possibility of non-violence in today’s world.

His earlier work—a trilogy comprising ‘Dependence and Disillusionment: Emergence of National Consciousness in Later 19th Century India’, ‘Enslaved Daughters: Colonialism, Law and Women’s Rights’, and ‘The Oppressive Present: Literature and Social Consciousness in Colonial India’ explores the consciousness of the English educated in India. He has been associated with various academic institutions in India and abroad